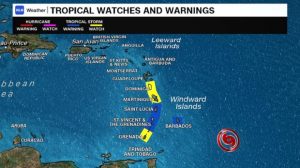 A Tropical Storm Watch is in effect for Grenada as of 11PM (local time) on Sunday, August 25, as Tropical Storm Dorian continues to strengthen as it moves towards the Lesser Antilles. As of 5 a.m. EDT Monday, the fourth tropical storm of the Atlantic hurricane season was centered about 225 miles (365 kilometers) east-southeast of Barbados and moving west at 14 mph (23 kph). Maximum sustained winds are at 60 mph (85 kph). The storm has maximum sustained winds of 85 kph (50 mph) and is expected to strengthen in the coming days as it moves past the Windward Islands (map here). Portions of the Lesser Antilles are expected to receive between 5-10 cm (2-4 in) of rainfall, with possible maximum amounts of 15 cm (6 in) in isolated areas. Tropical storm conditions, including strong winds and rains are possible in the territory by the evening of Monday, August 26 and Tuesday, August 27.

Several linches of rain are expected in affected areas.

They said Dorian could be near hurricane strength on Tuesday and and Wednesday while it’s over the eastern Caribbean Sea.

The National Weather Service office in Tampa Bay tweeted Sunday it’s “too early to speculate” if Dorian will impact Florida.