Rental of Mall Space on the Rise

Discounts on Rental Fees at the Esplanade Mall in St. George’s could soon be a thing of the past.

GRENREAL, which has been in operation for fifteen years, says during the economic crisis, it had offered discounts to its tenants, but this is no longer sustainable.

An operational review in 2018 according to the Property Managers recommended a reduction in discounts amongst other measures.

GBN News understands that this has caused some concerns for existing tenants.

C.E.O of GRENREAL Denis Cornwall, says they are now implementing new the measures.

“With interaction with some of our tenants you may hear stories that the rent is increasing or becoming more expensive. I would say that its not that the rent has become increasingly expensive, but we have had to for our own survival reduce on discounts we have been giving in the past” Cornwall stated.

He says the country has been showing signs of growth and commercial activity has returned to some form or normalcy.

Cornwall added that if measures are not taken now to secure stakeholders interests, they could fail to exist.
GRENREAL says it is focused on trying to get the right mix of clients.

GBN News understands that rental fees range in the thousands.

Cornwall says the rates are comparable to similar mall operations in Grenada.
GBN News further learnt that some businesses had to close their doors, as a result of the high rental costs.

When quizzed on this, GRENREAL’s C.E.O had this response.

“We have had to take some decisions to claw back some of the space from some tenants, because having reduced the discounts we have given, there were those who basically said they couldn’t afford any increases,” he added “But the time has come when we believe that if we do not take care of our own survivability then there wouldn’t be a mall.”

Mr. Cornwall told GBN they have given tenants options. One of those he says is if the tenant cannot afford to pay rent for the space you have, one of the options is to give up some of the space.

Having given up some space, the Mall was able to rent out to other tenants.

Some tenants understand what is being done the CEO says, but others have resisted.

At present, the Esplanade and Bruce Street Mall accommodate close to 80 tenants. 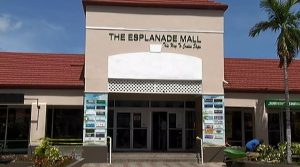