2019 shows a 77.3% increase in fires, with bush fires accounting for fifty-six of those.

That’s according to fire officials from the RGPF’s fire department.

Police for this year have responded to one hundred and seventy- seven fire calls.

That’s one hundred and eleven more than the same period last year.

Sergeant Thaddeus Hamilton says the early onset of drought like conditions made it conducive for the increase in bush fires.

This year forty-three more were recorded, bringing the total for the same period to fifty-six.

However more dwelling houses and business fires occurred last year than the first four months of 2019.

Statistics show thirteen dwelling houses went up in flames last year, with that number reducing by three this year, while business fires went down from six to two.

Rubbish fires moved up from eleven last year to twenty-eight this year and vehicular from three to one.

The department also recorded a decrease in electrical fires by five.

Three persons were arrested this year for the offence of burning without a license and not informing neighbors.

One matter was disposed with a fine imposed of three hundred dollars to be paid in in three weeks or in default one month imprisonment.

The two other matters are still pending in court. 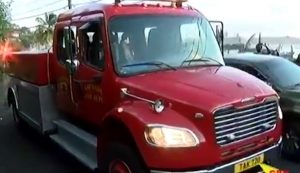