Acting Political Leader of the National Democratic Congress Adrian Thomas wants government to see the need to implement a land use policy.

a loose boulder making its way down the hillside in gouyave estate st. john’s resulted in structural damage to two homes in its path.

Iva Williams of Gouyave Estate St. John’s was at home when tragedy hit, however she was unaware of what has taken place outside her house.

Speaking to GBN on the weekend, she said no one spoke to her on having the stone removed.

She explained that her initial reaction to what she felt was an earthquake was a calm one.

Ms. Williams is hoping sooner rather than later something would be done to avoid another occurrence.

Echoing similar sentiments and there as a show of support to the affected families was Acting Political leader of the National Democratic Congress Adrian Persuader Thomas.

He believes it’s time for government to implement policies to prevent situations like this.

Similarly over in Requin St. David, video footage show a huge boulder that can let loose at any time. Again a call for government’s intervention. 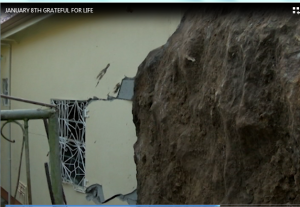 IN AID OF CANCER PATIENT

ONE HOUR OF PRAYER