IN AID OF CANCER PATIENT

The burden of a high medical bill has gotten a little lighter for one family.

Sarah Mark was diagnosed with Leukemia, a rare type of cancer in October 2020

Her seven months treatment would cost her family over sixty-eight thousand US dollars, an amount they say they cannot afford at this time.

The nine year old who is the last of three children, lost her mom two years while she was only seven. She lives with her dad Edward Frame and two other siblings

As a single parent, Frame tells how he found out about his daughter’s complaint was through a relative who noticed she was stooling different. He says it is a challenge for him dealing with his daughters sickness.

Sarah was flown to Barbados within weeks of her diagnosis to receive treatment.

She was accompanied by her aunt Andora Mark and is now warded at the General Hospital here in Grenada after developing a fever.

The Club says it will continue its fund-raising efforts so that they could assist other families where possible. 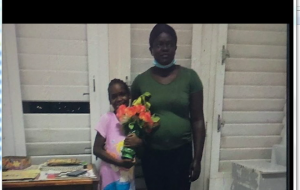