Going For The World’s Best Brain

Grenada has high hopes of claiming the top spot in this year’s international brain bee competition.

Having won the local leg of the competition, Javoni Thomas, a student of the J W Fletcher Catholic Secondary School, leaves the island with a support delegation on Saturday.

Striving to be named the worlds’ biggest\best brain, Javoni Thomas leaves the island this weekend for South Korea, where the international Brain Bee Competition will take place.

Grenada’s Brain champion will clash with Brains from over thirty countries around the world.

Javoni is optimistic that he will do well as he goes off to represent not only himself, but his Country on the international stage.

Having no prior knowledge, Thomas says this competition has exposed him to a wealth of information as to how the brain functions.

However he says he does not view this competition as a challenge.

Event Founder in Grenada, Pastor Stanford Simon says Grenada is now highly respected internationally, as it is the only country in the region with a Brain Bee competition.

He sees this as a great opportunity business people should be willing to throw their support behind. 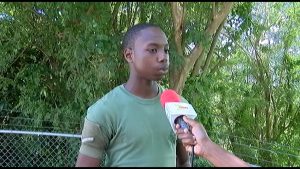 It is an expensive undertaking Simon says, thanking those who contributed towards their travels to the Orient.

He believes Grenada is in good standing to win the competition, following extensive preparation with top professors at St. George’s University.

The Brain bee competition started ten years ago by the Christian fellowship cooperation and later adopted by the St. George’s Baptiste Church.

The South Korea final begins on September 21st and runs for four days.