Acting commissioner of police Edvin Martin is forecasting a further ten percent reduction in crime for 2019.

The commissioner reported crime has contracted by six percent in 2018, compared to 2017.

He made the declaration at Monday’s elevation ceremony, where one hundred and twenty-five lawmen ascended to higher ranks.

According to the top cop, with the emergence of transnational organized criminal activity, Cybercrime, Terrorism and Climate change, Grenada is not immune and needs to be on guard.

Reiterating this quote ‘heavy is the head that wears the crown’ Commissioner Martin reaffirms that the task ahead for the 125 promoted officers would be a challenging one.

The country he says is still plagued with acts of sexual crimes and of major concern the prevalence of offensive weapons.

Offensive weapons were a main contributor in seven homicides for 2018.

The RGPF has on record a 73% solve rate. 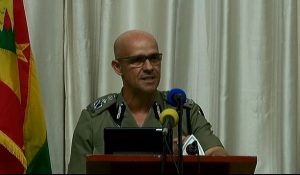