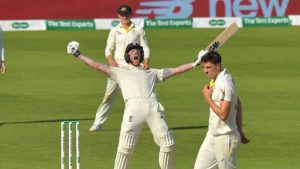 Ben Stokes’ astonishing 135 not out repeated his world cup heroics and gave England one of their greatest victories to keep the Ashes Series against Australia alive.

Just as he carried England through the super over against New Zealand, stokes played one of the most incredible test innings by an Englishman to level the series at 1-1.

In the chase of an England record 359 at a delirious Headingly, the home side still needed 73 when stokes was joined by last man Jack Leach.

Like he did in his innings six weeks ago to the day at Lord’s, Stokes launched a stunning solo assault.

The series is now level with one match left to be played as the third test was rained out.

The fourth test will be at Old Trafford beginning September 4th.