There has been an upward trend of violent acts involving deadly weapons and young people over the past few weeks.

Over the weekend one youngster lost his life after a stabbing incident in St. Andrew.

One pastor believes the recent spate of violence is due to several factors driving frustration among the youth.

The issue of violence among young people was the topic of GBN’s Good Morning Grenada with Pastor Gerry Keens-Douglas on Monday.

Pastor Keens Douglas says he is wondering if the increased tension among members of the Grenadian public is a result of pent-up emotions.

He says coming out of a two-year period where people were not able to socialize due to covid 19 and the six feet social distancing, they may be experiencing difficulty being in each other’s personal spaces again.

Speaking to the issue of violence among school children, as a former school principal himself Pastor Keens Douglas said he believes their behavior is a reflection of what they see in greater society, more specifically; substance abuse.

Last week video circulated on social media of a young man being assaulted by and subsequently running away from a group of young men in St George.

Another video showed a student of a popular secondary school in St George brandishing a weapon at a school sporting event last Thursday.

These are just two of many videos that have been making the rounds involving young people and violence.

On Monday, another video made the rounds on social media of a young man in secondary school uniform in a confrontation with a police officer.

The situation then turned physical when another officer intervened.

The student was subsequently detained. 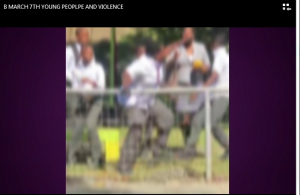