Organizers have promised a bigger and better fete, as the soca duo launched under the theme ‘Mas with a difference’.

On Monday, members of the Wuss Ways Empire officially launched wuss fete 2019 with a cast of both regional and local acts.

According to Shane Mc Quilkin, public relations representative for the Wussways empire, the change in the date of the event has been moved for a number of reasons, including the successful execution of the Grenada music festival, artiste availability and international bookings.

Coordinator for Wussways, Menesha David gave a brief overview of what can be expected at wuss fete 2019.

She says on May 8th, fans are invited at Marlmount Playing Field for the mega event.

The organizers have added that the official media launch for the event is geared at promoting the brand and meeting international standards as the duo has been flying the Grenadian flag far and wide.

They also noted that a number of charitable deeds have been done and are still ongoing.

Meanwhile, the reigning monarchs say great things are in store for Spicemas 2019.

They plan to continue to flying the Grenadian flag far and wide, while attracting a number of visitors to pure Grenada.

Lil Natty also made a plea to Soca artistes who opted out of the 2019 Soca monarch competition. 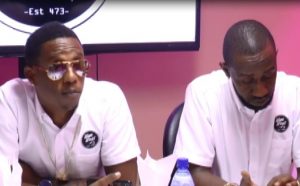