They were introduced as women of power who have roots grounded in Grenada as they made a return to the land of their heritage.

The occasion was the Convention of the ruling New National Party on Sunday, and the dynamic female duo appeared as special guest speakers during the semi virtual event.

Rooted and tied to the Grenadian heritage were the two guest speakers during the New National Party’s Convention on Sunday.

However, likening the period of her Grenadian ancestor, Prime Minister Mottleysays the region is again facing threats to the beauty of the CARICOM agenda.

The Barbadian Prime Minister reiterates that in her reflections the aspirations of forging unity while doing more and better for the people via regional integration are being attacked by individualistic goals.

The Caribbean leader impresses that a climate crisis is another major factor the region is facing.

Meanwhile, Daughter of the soil Akima Paul Lambert who is a UK based attorney says the citizens have a supreme responsibility to do the best for the country.

Mrs. Lambert is also Grenada’s non-resident ambassador to the Holy Sea and highlighted on the steps needed to build the house of Grenada. 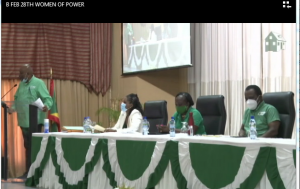 GRENADA’S ECONOMY TO BOUNCE BACK