Following a week of activities last week, the unions representing public workers say they are charged to continue into this week, as they strive towards securing public servants’ 4% salary increase.

The unions are back with more protest action this week as Government’s failure to comply with the signed collective bargaining agreement that requires public servants’ salaries to reflect a 4% increase by January 31st, 2021, continues.

President of the Public Workers Union Rachael Roberts says mobilizing union members will be one of the key focuses this week as she unveiled the unions’ plans.

Roberts said efforts last week did not reach as many union members as they had hoped, but the plan is to get everyone on the same page.

Last week saw days of planned protest action which began January 29th where workers wore their union t-shirts. The following Tuesday members were again asked to wear their union t-shirts while Wednesday (Red Day), members of the public were asked to join public officers and teachers in wearing anything the color red.

Thursday’s Horn for 4% saw motorists honking their horns in solidarity with the public officers, whilst Friday; dubbed Black Friday, teachers and public servants wore black to demonstrate displeasure with the non-payment of the 4% increase.

Last Wednesday the Government reinforced its rationale for the deferral of a 4% wage increase saying the increase will add $13.2 million to the public sector wage bill, at a time when the Government is facing a significant drop in revenue, due to the economic impact of the Covid-19 pandemic. 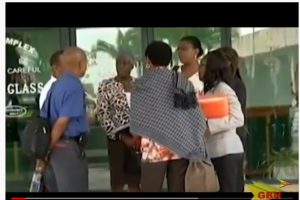