The ISM crown is in Grenada!

On Saturday hundreds of people turned out to celebrate the return of Grenada’s soca stars and soca King, following their remarkable performances in neighboring Trinidad and Tobago in the recently held Carnival Celebrations.

He encouraged people to ‘believe in yourself until the world believes in you’.

Mr. Killa addressed fans at a Government sponsored welcome home event at the National Airport, which then led into a motorcade that concluded that the Curtbert Peters park, Gouyave.

All six artistes represented Grenada proudly at the final of the ISM in both the groovy and power soca categories.

Grenada this year had a record breaking 5 acts in the finals of the ISM.

Mr. Killa captured the crown, a first time feat for a non Trinidad national in the power category.

V’ghn placed third at the groovy competition and Mr. Legs third in the power category.

The other Grenadian performers were Mandella Linkz and the duo Little Natty and Thunda.

All the artistes expressed gratitude to fans and followers on Saturday, while treating the home crowd to the sweet sounds of their soca music. 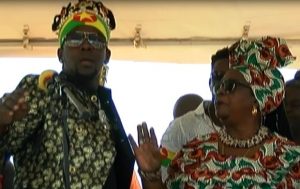