Police ruled out excessive alcohol consumption as the main cause of this weekend’s vehicular accidents at different locations throughout the country.

Most of these accidents are considered minor as no lives were lost.

Twenty-eight accidents recorded between Saturday and Monday alone, however, police say alcohol was not to blame this time.

Speaking to Inspector Rondell Baptiste in charge of administration and operations attached to the traffic department of the Royal Grenada Police Force believes a lack of focus while driving was a major contributor.

Twenty-seven of the twenty-eight accidents were considered minor according to the inspector. However, Police are investigating the lone, serious accident which occurred in the vicinity of St. Paul’s last evening.

The driver and one of two occupants were taken to the general hospital by ambulance for medical examination. The other occupant according to reports fled the scene; however, the police were able to catch up with him.

The officer lauded members of the public for being responsible for their alcohol consumption and less speeding and urged the motoring public to drive with due care and attention and be aware of other road users.

According to the police report they are likely to be released from the hospital by the end of this week. 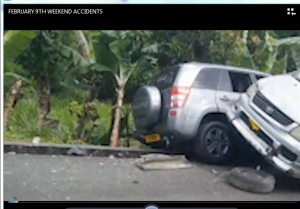 THE ABSENCE OF CARRIACOU CARNIVAL