The committee is now appealing to the powers that be to allow good sense to prevail.

Jude Bernard a member of the Camerhogne Park Committee believes Grand Anse beach is under threat environmentally, due to the increase of hotels constructed on the beach.

Looking at its current capacity, Bernard sees it wise to cease construction of any additional hotel along the Grand Anse beach for at least another decade. It appears he says that a lack of proper planning and consideration for the nation’s youth was not factored in when deciding to construct.

Bernard says they are not against development; however, there must be inclusion, consultation, and communication.

Supporting Bernard’s argument in his bid for space is George Mason who is also a member of the Committee said the struggle to keep the park has been a long-standing one which they have succeeded with thus far.

He noted that this presents the perfect opportunity to either allow the CPC or those in authority to repair the recreational facilities in the park for children to recreate.

According to Bernard, It is not clear whether or not the property for the Rivera site has been leased or sold. When asked about their plans for the park, Bernard reminds them that the park is still in the hands of the ministry of tourism. 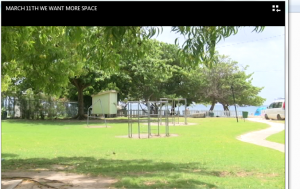 TAKE TO THE CCJ