On Monday, Vendors at the Kirani James Athletic stadium location, turned to the media to voice their dissatisfaction, as tents were dismantled and taken away from them, leaving them unhappy.

During this morning’s post-cabinet briefing Minister Cox responded to the issue saying the matter was resolved.

According to the minister, the services of another company was sought which was cheaper than the present one used.

Minister Cox says it was within the contractor’s rights to do so but believes this could have been handled more amicably.

Waggie-T is the new contractor hired by the ministry.

GBN revisited the vendors on Tuesday and was told that they are quite satisfied with the prompt action taken by the ministry.

GBN also contacted Blue Bubbles. We were told that since another ministry took over the responsibility that all the tents were not necessary. Instructions were given to remove the four larger tents, leaving the smaller ones in place.

Providing an update on the market project Minister Cox says  work is progress quite smoothly and they are on schedule, all materials necessary are on island and the project should be complete by the first quarter of this year. 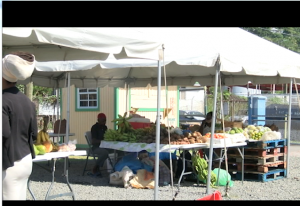 OUT OF BUSINESS BY JUNE