You won’t be able to vist Grenada’s Historic Fort Fredierick for a while.

An act of vandalism has forced these gates to be shut.

Access to the Fort Fredrick was restricted after several acts of vandalism were discovered. GBN understands that foullanguage was sprayed onto the walls and signs which provide details about the fort’s history.

An individual who works nearby informed GBN that the gates have been closed for the past eight weeks.

He expressed dismay that COVID-19 did not force the closure, but the act of irresponsible individuals.

A well-placed source,tells GBN that no arrest has been made but that investigations are ongoing.

Fort Fredrick is one of several attraction sites which are slated for improvement works.

The project will include the installation of perimeter fences and improved signage.

GBN has been told that there’s a challenge in getting the signs done because there is no one on island who is able to do the metal work required. We were told that this service might have to be done elsewhere. 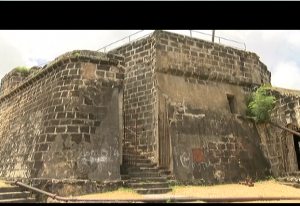