More than 7 years parents’ teachers and community residents have been clamoring for urgent action from government authorities to an unhygienic problem confronting two of the nation’s most vulnerable groups.

Too many calls, letters and requests have gone unanswered and parents are now saying, enough is enough it’s time for action.

Parents of the limes pre-school took to the media again on Monday to make what they hope is their final appeal.

Who’s going to address this situation? The question asked by many parents whose children are victims of what has become a health and safety issue.

The situation affects two of the most vulnerable groups in society, a pre-school and the school for special education.

Seven long years, still nothing has been done. Parents are asking, is the authority really concerned about the health and safety of students?

A mentally challenged man and another physically challenged have been using the schools compound and students’ kitchen garden as a dumping ground for human waste\ feces.

Yuseef Ben is another parent. He says the students cannot go out to play neither can the grounds men properly clean the surrounding as waste often gets in their faces from the weed eaters.

This parent’s concern is about the mental instability of one of the gentlemen who often acts out of character as they the parents pass by. 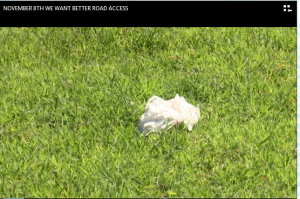