Trade unions are sending a strong signal to government. Pay us and vex with us. It’s a common chant of unions on Labor Day and now they are invoking the rhyme as they dismiss a request for a deferral of a salary increase which is due this month.

On December 31st 2020 officials of the Government Negotiating Team MET WITH representatives of the Grenada Union of teachers, the Technical and Allied Workers union and the Public Workers Union to discuss salary increases for  2021.

According to Union Leaders, government asked that the unions defer the salary increase of 4% for 2021. However they dismissed the request on the grounds that the government does not appear to be always truthful.

President of the Grenada Union of Teachers Marvin Andall says recent actions suggest that the Keith Mitchell administration is not as cash strapped as they want them to believe.

The Public Workers and Technical and Allied Workers Union said in a press statement that they will only defer wage increases of 4% for 2021 up to June 31, this year.

But there’s a caveat. (car-vee-att) If they agree to defer until June,  it must be with 0.5% interest for each month that the increase is delayed.

They are also demanding that the full summust be paid retroactively by the end of July this year.

In addition, the unions’ proposal is that docked salaries of workers due to strike action in September to December 2017 must be repaid in full no later than this month end.

The union leaders are also demanding that  all contracted workers must be regularised and made permanent through the Public Service Commission by April 1.

The unions make it clear that their decision is in the interest of safeguarding and securing the lawful salary increases and employment rights of their members and workers as a whole. 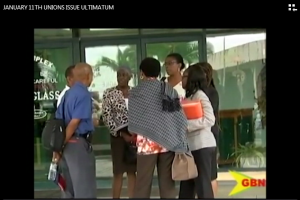 ONE HOUR OF PRAYER