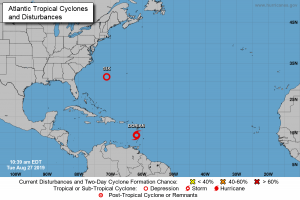 A tropical storm watch issued for Grenada, Carriacou and Petite Martinique as Tropical Storm Dorian makes way across the region has been discontinued.

The all clear was given by Minister with responsibility for the National Disaster Management Agency (NaDMA) and Information, Sen Winston Garraway, effective 11am today.

The Tropical Storm Warning has also been discontinued for St. Vincent and the Grenadines.

Garraway said while Grenada give thanks for being spared from tropical storm Dorian he is calling on citizens to remember neighboring countries affected by the system.

Meanwhile, the 11am bulletin from the National Hurricane Center in the US, says a Tropical Storm warning has been issued for portions of the Eastern Dominican Republic, as heavy rains and gusty winds are still affecting the Northern Windward Islands and Southern Leeward Islands..

Puerto Rico has been declared a state of emergency, as a Hurricane Watch has taken effect ahead of the passage of Tropical Storm Dorian.

A Tropical Storm Watch remains in effect for Dominica, Saba and St. Eustatius and parts of Dominican Republic.

Interests in the Virgin Islands are advised to monitor the progress of Tropical Storm Dorian.

Tropical Storm Dorian is moving toward the west-northwest near 13 mph, and this motion is expected to continue through tonight, followed by a turn toward the northwest on Wednesday.

On the forecast track, the center of Dorian will move across the eastern and northeastern Caribbean Sea during the next few days, passing near or south of Puerto Rico on Wednesday, move near or over eastern Hispaniola Wednesday night, and move north of Hispaniola on Thursday.

On Thursday night and Friday, the center of Dorian is forecast to move near the Turks and Caicos and southeastern Bahamas.

Slow strengthening is forecast during the next 48 hours, and Dorian is forecast to be near hurricane strength when it moves close to Puerto Rico and eastern Hispaniola.