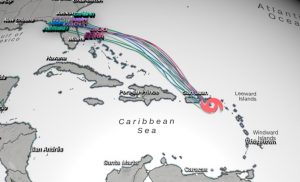 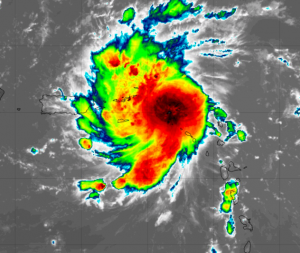 After impacting the Lesser Antilles on Tuesday, Tropical Storm Dorian began to unleash heavy rains and strong winds across Puerto Rico and the U.S. and British Virgin Islands on Wednesday.

As of Wednesday, Dorian’s maximum sustained winds were 70 mph as it tracked northwest at 13 mph about 25 miles southeast of Saint Croix. Tropical-storm-force winds extend outward about 60 miles from the center of the storm and additional strengthening is likely in the coming days as it pulls away from the Caribbean.

Dorian’s path shifted and will take it over Puerto Rico, rather than further east over Hispaniola, before traveling northwestward through the Bahamas with an eventual strike on the Florida Peninsula as a hurricane sometime on Monday morning. As a result, the National Hurricane Center has issued a number of watches and warnings. Puerto Rico remained under a hurricane watch early Wednesday, and a hurricane warning was in effect for the U.S. and British Virgin Islands.

All interests in Puerto Rico, the Bahamas, Florida and the rest of the Southeast and Gulf coasts should continue to closely monitor the progression of Dorian, which delivered strong winds and heavy rain during its passage through the islands of Martinique, Barbados and St. Lucia.

At the very least, a swath of building seas, rough surf, heavy rain and gusty winds will spread northwestward along the path of the tropical cyclone.

Fluctuation in strength is likely with Dorian’s intensity ranging from a moderate tropical storm to perhaps a Category 1 hurricane or stronger.

Impacts from Dorian on Puerto Rico will be dramatically less than the magnitude the island felt from Major Hurricane Maria in 2017.

Still, officials in Puerto Rico are not taking the storm lightly. Gov. Wanda Vázquez Garced said on Twitter on Monday that she issued a state of emergency declaration for the island. About 360 shelters, which hold a capacity of 48,500 people, have been opened while 24,000 cots were distributed.

On Tuesday, President Donald Trump approved an emergency declaration for Puerto Rico ahead of Dorian’s arrival.