The next time you think about discarding an old fan or plastic bags, you may want to consider sending these to Calliste in St.George.

A gentleman there is converting other men’s trash into treasure, while making his contribution in environmental protection and preservation.

It was a refreshing experience, listening to Mr.Godfrey Luke of Calliste in St.Georges Director Chip and Chistle.

For years he sat back and watched as people indiscriminately dumped used items from their homes and had no consideration for where their garbage would end up or its negative impacts on the environment.

That’s how Chip and Chistle was born. Chipping away at old discarded wood, Metal, plastics and other items, chiseling them into something new and useful.

Not one given to complaining but driven to action, Mr. Luke went to work, collecting garbage and engaged his brain about how he could turn trash into treasure.

His pieces all have given names, one of them he labelled the grand master, another Coconut Worriers. That piece which was a spectacle at the Maurice bishop International airport.

Judy Antoine is the director of Ashanti Footprints and Chip and Chistel. She believes that children ought to be taught the skills as well, since they will succeed today’s adults in running the country.

It’s not seen as a burden but a blessing to the young people who have signed up for participation.

By now the Chip and Chisel Museum has accumulated a collection which is awe inspiring.

In the present staycation mode that has been thrust upon the island in these times of COVID-19, it will be worth paying a visit to the museum at Calliste, where you will get a firsthand look as Mr. Luke sets the future in gear with Ashanti Footprints. 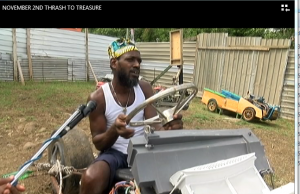