Changing people’s mentality about martial arts as only a means of defence but rather a discipline.

Archibald Gooding a Grenadian born who lived abroad for many years is presently in Grenada. He claims to be a doctor in the field of Martial Arts and is on a mission to transform the art here.

Having travelled to many countries, Gooding says he wants to leave a legacy among young people by getting them to understand the importance of discipline.

Finbar Benjamin a professor at Oakville University Alabama says martial art has thought him to accept his being.

During his stay in Grenada, the martial arts teacher says he will continue to engage students to share his defense tactics. 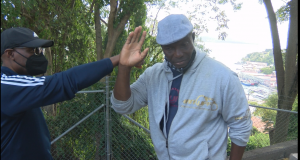 CHALLENGES AT THE HOSPITAL