TO DISTRAUGHT TO SPEAK

A shocking scene, of what appears to be a young man bleeding heavily on the stoop of a church has thrown a community in St. Patrick into mourning.

It’s the third suspected suicide in the parish in just a few weeks.

Family members say they are too distraugt to speak, after the death of their twenty eight year old relative Robert Fredrick Jr.

According to a police report Fredrick is believed to have succumbed to a self- inflicted wounds to his neck, sometime on Thursday afternoon.

Sources say Fredrick arrived in Grenada sometime in late March shortly before the country went on lock down on vacation from the United States.

According to a reliable source, the victim started acting strangely about two weeks now and in the last couple days as recent as yesterday things took a turn for the worse.

The source says they tried talking to him to find out what has been bothering him but was unable to get through to him.

An autopsy report is pending to ascertain the actual cause of Fredrick’s’ death. 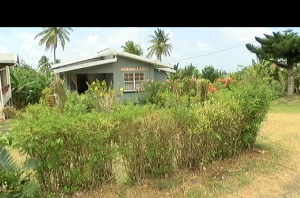