Have you ever thought of a way to make your country better?

That is the aim of the pivot movement, the brainchild of the Inter-American Development Bank and its partners, collating ideas to create a plan for the future of the Caribbean.

Barbados Prime Minister Mia Mottley opened the inaugural pivot event by urging the people of the Caribbean to harness their cultural confidence and creative imagination to allow the region to secure its place as a world leader in technology and innovation.

Self-contempt, as described by cultural icon Peter Minshall or the lack of cultural confidence as defined by Barbadian Prime Minister Mia Mottley, is being attributed as the greatest barrier to Caribbean people’s development that is inherited from birth via the onslaught of colonialism.

Mottley believes every small islander is restricted by the psychological mindset that we will never achieve revolutionary and international acclaim.

Addressing the opening of the Time To Pivot event on Friday on the topic “The Caribbean As A Global Leader”, Mottley says the lack of cultural confidence has led to several societal and ethnic issues.

Who are we as a people, what is our purpose and what is the value of our contribution are just some of the questions the Caricom Chair says need to be considered.

The Barbadian Prime Minister says our region has been dependent on two vulnerable sectors, agriculture and tourism, while being slow to digitize and timid to innovate.

Impressing on the international icons, pioneers and revolutionaries the Caribbean has produced via our universal education, Mottley says it is time we embrace our identity.

Technology is the future, and she says its use should not alter the essence of our regional identity. 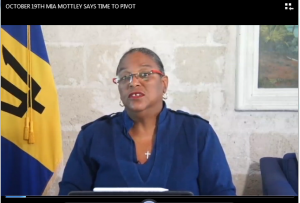