THREE TIMES IN A ROW

It was a close run for the top four finalists in the independence calypso competition Friday night, with seven points separating them; however, Sean Niles was crowned on the night.

For the first time, patrons had no choice but to view the competition via virtual means.

Three years in a row, the crown has once again returned to the head of Sean Niles (Sour Serpent).

Niles rendition of “Vaccine Nation” captivated the judges giving him a lead of almost three points ahead of second-place Filandy Jeffery with his score of 84.8 points.

Niles who spoke to GBN via telephone on Saturday says should there be a carnival competition this year he is ready.

Third place went to Sheldon Douglas and in position, Anthony Darius who made a comeback after taking a ten years break from the arena. 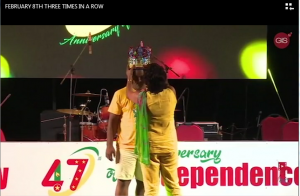