Did anyone see anything?

A passenger bus was stolen from the St. Georges bus terminal Wednesday.

Camera footage could not lead to an arrest, however, the bus was later found.

The owner of a passenger Bus number HAB 13 Ian Sandy, plying the zone eight route through Happy Hill, was shocked to learn that his bus was removed from the terminal without his consent or knowledge.

His bus was stolen in plain sight from the St. George’s Bus terminus on Wednesday, just before noon.

According to information reaching our News Desk, the unsuspecting driver was away from the vehicle when the culprit saw his or her opportunity to ride out.

(Was the key left in the ignition)?

Speaking on behalf of the victim Public relations officer of the National Bus Association Derick Mc Kenzie explained that the driver was distressed, not knowing where his bus was or who took it.

GBN was told that the distressed driver reported the matter to the police and later found his bus in the Boleau (Beaulieu) area with a bit of damage to it.

In light of this, the PRO warns against bus operators living their keys in the ignition unattended.

No arrest has been made. 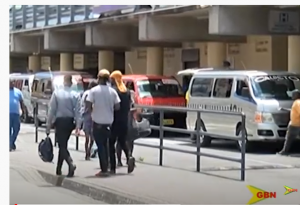