THE PANDEMIC AND CLIMATE RESELIENCE

In the most recent episode of ECCB digital dialogues, the conversation was based on the ongoing pandemic and climate crisis.

The focus was in the area of renewable energy and ideas on how to scale up its use in the ECCU.

The Eastern Caribbean Currency Union’s energy mix regarding renewable energy stands at only about 10 percent.

ECCB Governor Timothy Antoine says the region is lagging behind, with renewable energy key to fueling our recovery, building our resilience, and delivering transformation.

Governor Antoine adds, in 2019, the ECCU’s fuel import bill stood at 1.2 billion dollars, representing significant leakage in foreign exchange while affecting the ease of doing business and its ranking.

However, Dr. James Fletcher impresses that despite the pandemic overshadowing the climate crisis; it made no dent in reducing the warming of the planet.

Dr. Fletcher says the planet’s temperature increasing by 1.5 degrees Celsius remains the threshold for Small Island developing states, an ominous situation as the planet has already warmed by 1 degree Celsius.

Stephanie Gill, from The World Bank Group, says this shows the need to move to clean energy with a further threat to the economic crisis within the Caribbean.

She says it makes strong economic sense to shift to a green, renewable energy, energy efficiency recovery model and for sustainable growth. 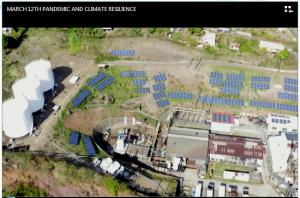