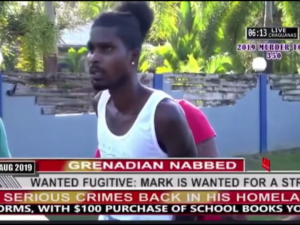 A Grenadian has been arrested and detained in Trinidad after fleeing the Spice Isle while on bail on robbery charges.

Jeremiah mark of Seamoon St. Andrew, was one of four people who was charged for allegedly stealing $50,000 worth of goods from a store room in St George in March.

GBN received information that Mark was recently arrested by police in Trinidad and Tobago.

A video from the popular Crime Watch programme showed the Trinidad police swooping down on Mark last week.

The Criminal Records Officer in Grenada, told GBN , that they received information that a person bearing Mark’s description was arrested by the Trinidadian authorities.

However, the Head of the Community Relations Department of the Royal Grenada Police Force, Supt Vannie Curwin, told GBN that in keeping with law enforcement protocol, they are awaiting positive identification from INTERPOL, the International Police Criminal Organisation.

INTERPOL works with the police in 194 member countries to fight international crime.

GBN understands that about 20 thousand dollars’ worth of the goods have so far been recovered.