One Grenville fisherman met his demise Tuesday morning while venturing out to sea.

Eric Williams’ aka dark night boat was spotted in distress by fellow fishermen.

The incident is reported to have happened just outside the Grenville fish market area sometime after 6 am on Tuesday.

According to reports, Williams appears to have suffered some medical mishap while heading out to ply his daily trade.

Fishing expeditions were called off for the day, as the fishing fraternity in and around Grenville St Andrew has been thrown into a state of sadness at the unfortunate passing of one of their colleague.

Eric Williams or ‘Dark Night’ as he was affectionately called hails from the village of Soubise, St. Andrew.

GBN was told that the deceased was on his way out to sea to ply his trade, something he has been doing for the past forty-plus years when colleagues from another vessel saw his boat spinning but no ‘Dark Night’ in sight.

Calliste hopes this will serve as a wake-up call for other fisher folks that they should not venture out at sea alone.

Police on the sister Isle of Carriacou have confirmed that the body of a male was discovered Tuesday morning on Upper Main Street Hillsborough Carriacou.

The man, who goes by the alias Crabman, was found around after eight AM.

Autopsies for both men to determine the actual cause of death are still pending. 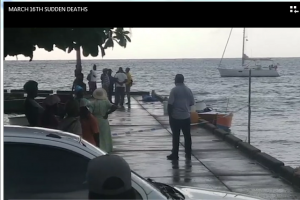 PUMP IT UP WITH A DIFFERENCE