Some students of the St. Dominic RC school in St. David were unable to attend school on Friday morning, after being traumatized when a mentally ill man tried to enter a classroom, armed with a cutlass the previous day.

The man, who is a well-known resident of the area, was seen walking on the school compound wielding a cutlass, which he allegedly used to try to enter a grade 1 class filled with students, leaving cuts on the classroom door.

While explaining to GBN what occurred on Thursday morning, Nicole Cambridge, an executive member of the school’s Parent Teacher Association, and parent, said the issue of security at the school must be addressed as soon as possible, as this incident could have ended badly.

The school is only partially fenced and can be accessed by anyone at any time.

The PTA is now brainstorming on how this can be fixed and is seeking the assistance of the general public and Government.

On Friday morning counselors were at the school to speak to students and teachers who were affected by the attack.

Only 12 of the 32 students of the classroom that was attacked were present for Friday morning’s counseling session. The other 20 were reportedly too traumatized to enter the school compound.

This mother who preferred to remain off camera said her 7-year-old son will not be physically attending school for a while as he is still devastated.

Minister for education Emmaline Pierre said her ministry is aware of the situation.

The mentally challenged individual was apprehended on Friday morning by members of the Royal Grenada Police Force. 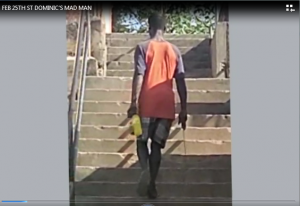