A St David resident is voicing environmental concerns over the preparatory work being done to allow construction of the Six Senses Hotels in La Sagesse.

He questions the price of progress, saying the destruction of the mangrove trees around the area is unacceptable.

In August it was announced that Range Developments, the property developer for the Six Senses Hotels Resorts Spas will initiate a project that is scheduled to open in 2022.

It is expected to create more than 500 jobs during construction, and hundreds more after.

However, with preparatory work being done to facilitate this major undertaking, one concerned resident, Junior Francis says the project is going contrary to the island’s environmental advocacy.

He noted that there has been destruction of the mangrove trees in the vicinity in which the resort will be built.

He is now calling on the relevant authorities to look into these concerns and have the issues resolved sooner rather than later.

Francis is also of the view that when such developments are being made, an official within the physical planning unit should be present on site at all times.

GBN has reached out to the Finance Ministry in this regard, however the officer was unable to comment at this time. 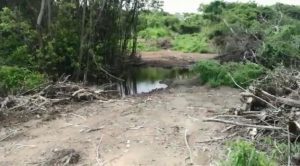 Carriacou To Be Certified Tsunami Ready