A number of Grenadians incensed by the murder of Minnesota man George Floyd at the hands of a white police officer staged a peaceful protest rally against racist police violence and the threat of US military force in American cities against Grenadians in the diaspora.

The protest was staged, in front of the US Embassy in Lance Aux Epines. 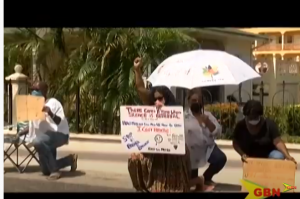