Grenadians are now being expected to remain under curfew for a longer period of time.

During last week’s post-cabinet brief, attorney general Dia Forrester when quizzed by the media on the lack of a time period within the proclamation said that the state of emergency and curfew will have extended for the next 21 days ending on February 2nd.

However, noteworthy coming out from parliament during the House of Representatives sitting on Friday, is that the state of emergency and curfew is now slated for the next six months.

The resolution was unanimously passed in the House of Representatives on Friday.

Initially, the declaration for the new state of emergency was scheduled to only be 21 days. This as Attorney General Dia Forrester was probed by the media last Tuesday.

However, during Fridays sitting, Leader of Government Business Gregory Bowen while proposing the resolution announced the changes.

Health Minister Nickolas Steele gave his full support for the resolution noting the state of affairs in regard to Covid cases in St Vincent, Barbados and St Lucia as well as the inter-regional trade between the countries.

Steele says they are hopeful that the curfew will not remain longer than required however is needed now due the threat being greater than ever before. 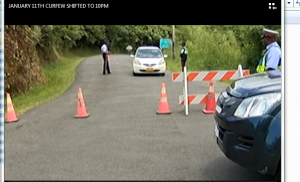