That’s the mantra of Sir Royston Hopkin, the Chairman and Managing Director of the Spice Island Beach Resort, as he prepares to receive a lifetime achievement award.

The award will be held at the Caribbean Hotel & Resort Investment Summit next week.

The Caribbean Hotel and Resort  Investment Summit lifetime award is presented to an individual who “has made significant contributions to the hospitality industry over his or her lifetime through their actions, deeds and accomplishments.”

Hopkin, who begun his distinguished career in the hospitality and tourism industry since aged 20, has spent over 55 years within the service.

In speaking with GBN, Sir Royston, in reflecting on his career, says humility is strength and therefore he embraces this new achievement.

“If its a Spice-island Award my staff are responsible, I’m just a custodian. This is a Royston Hopkin recognition, for my services to Tourism for my whole career, my whole life rather, because I’ve been involve in tourism since at the age of 20.” Sir Royston told GBN.

However lifetime achievement awards are not new for Sir Royston as he already received such honor from the Caribbean Hotel and Tourism Association and the American Academy of Hospitality Sciences.

He is the third honorary tourism ambassadors to receive the honor. Previously awarded were Sandals Gordon Butch Stewart and Punta Kana’s Frank Rainieri.

Sir Royston says himself and his entire family will be travelling to Miami next week to collect his award.

“I’m humbled by the honour and deeply honoured by being awarded,” the tourism ambassador said.

In December 1994, Queen Elizabeth II bestowed upon him the “Companion of the Most Distinguished Order of St Michael and St George” for his contributions to Grenada and Caribbean tourism. 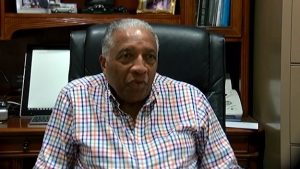