Sir Royston Hopkin KCMG, chairman of Grenada’s Spice Island Beach Resort , has once again been recognized for his great accomplishments. The tourism industry icon received a Lifetime Achievement Award at the 2019 Caribbean Hotel & Resort Investment Summit (CHRIS 2019) in the presence of over 450 delegates who had nothing but admiration for Sir Royston’s remarkable achievements.

“My life has been a life of service with honour and not for honour and I accept this award with utmost humility,” said Sir Royston, thanking the CHRIS officials for awarding him this signal honour at a luncheon attended by delegates from countries across the Caribbean as well as
the United States, South America, United Kingdom and Europe.

Sir Royston seized the opportunity in his acceptance remarks to address two key areas he felt are pivotal to increasing investment in the Caribbean with a view to enhancing the sustainability of this “dear region of ours.” Referencing the Sea of Opportunities theme of the
summit, Sir Royston pointed out that we would be unable to access those opportunities if we are not prepared to “think radical” and consider outside-of-the-box solutions.

Air Transportation throughout the region needs to be seriously addressed, Sir Royston noted, referring to the region’s current aviation challenges as a travesty. He said it is a “no go” for those who wish to invest in the region when they look at the state of regional transportation.

In support of Grenada’s Prime Minister Dr. the Rt. Hon. Keith Mitchell, Sir Royston reiterated that airport taxes must be removed if the regional airline LIAT is to survive. He noted that Dr. Mitchell has been advocating this for the past six years and he himself has been a proponent of this move for the past twenty-five years. Sadly he said, it has all “fallen on deaf ears.”

Regional governments, Sir Royston pointed out, have held on to the taxes, claiming that there will be no revenue to maintain their airports if these taxes are removed. Removal of the taxes, Sir Royston opined, will increase traffic and generate more income for the islands overall,
allowing them to fund their airport maintenance and development programmes. He indicated that there would be the need to seek bridge financing during the first three years of tax removal to allow for the exponential growth of traffic with significantly reduced fares.

Sir Royston also called for the harmonization of our Incentive Aids Ordinance throughout the region.

He challenged the delegates to discuss and work towards developing a policy where member countries agree on a common range of incentives which would attract more investors.

“Over the last thirty-five years, the cruise business has grown substantially while hotels have been struggling in every island, barring none,” Sir Royston said, adding: “Why is the cruise business succeeding and why can’t we attract hotel investors except in a few select islands?”
“We need to develop a policy that determines our own destiny and enables the hotel sector to maximize its economic value to our region. We must continue to cooperate with the international lending agencies that have supported us over the years, but we cannot allow ourselves to be governed or restricted by their policies. Cruise tourism is a vital source of revenue for our economies, but they operate in a tax free environment. While I fully support the Citizenship by Investment Program, which generated significant investment in the region, our
investment in our resorts and hotels must benefit from similar terms in order to remain competitive,” he argued.

Sir Royston urged Summit attendees to “lobby our governments with widely accepted solutions that embrace the ‘less is more’ concept. We must encourage them to strategically revisit taxation policies in order to attract more investment, especially in our room stock. This is
the only way to reduce unemployment and achieve greater tourism spend in our respective countries, thus improving our collective economies,” he further stated.

The distinguished hotelier also had kind words for his wife Lady Betty Hopkin, his children Janelle, Nerissa and Ryan along with the rest of his family in attendance, brother and sister Arnold Hopkin and Penelope Rodgers and son-in law Neil Duncan.

Sir Royston has had an extensive and distinguished career in the hospitality and tourism industry spanning more than 54 years of contributions to his home country, Grenada, and the entire Caribbean region. Sir Royston began his tourism career when he joined the family business at the Ross Point Inn in 1965. Then, at the age of 20, he was appointed to the Grenada Board of Tourism where he served for 18 consecutive years. He holds the distinction of being the first Grenadian to be elected president of the Grenada Hotel Association (an accomplishment at the age of 24), a position he held 14 times.

In 1969, he was appointed to the Board of Directors of Spice Island Inn, and in 1975, was appointed Deputy Chairman and Deputy Managing Director of the resort. He bought the Blue  Horizon Hotel (now called Blue Horizons Garden Resort) along with his brothers Arnold and
Gerald in 1978.

Sir Royston purchased a majority interest in Spice Island Inn in 1987 and became owner and chairman of the property, which he renamed Spice Island Beach Resort.

Under his skillful stewardship, the property expanded from 28 to 56 suites by 1990 and underwent a $6 million transformation in 2000, reopening with 66 elegant suites, a new spa, restaurant and bar. Also added were many enhanced services and amenities, further elevating the level of luxury at the property.

In 2004, Hurricane Ivan devastated the resort and Spice Island had to close its doors a second time.Undeterred, Sir Royston embarked on a US$12 million project to redesign and renovate the award-winning resort, which reopened on Dec. 15, 2005 at the highest level of
Caribbean luxury and personalized service, with facilities on par with any major five-star resort in the world. The resort now employs 205 persons.

In 2013, Sir Royston invested in another multi-million dollar series of upgrades and enhancements to ensure the boutique resort remains at the forefront of the luxury tourism market.

At a regional level, Sir Royston has served on the Board of the Caribbean Hotel & Tourism Association (CHTA), where he’s held numerous positions since 1970 including director, vice president, president and chairman. During his tenure with CHTA, Sir Royston founded the Small Hotels Committee, which today is still one of the most important subcommittees of the association. Sir Royston was also the youngest Director of CHTA ever elected.

Sir Royston was one of the first Grenadians to establish a Scholarship Fund for needy children when he adopted the Grand Anse R.C. School in 1992. He worked in collaboration with the Grenada Union of Teachers and the Ministry of Education to enlighten teachers about career opportunities within the Tourism Industry and created a lobby for tourism to be included in the schools’ curricula.

Sir Royston is the recipient of several prestigious awards including the coveted CHTA “Hotelier of the Year” honor, Lifetime Achievement Awards from CHTA and the Caribbean Tourism Organization (CTO), Grenada’s Silver Anniversary Independence Award for 25 years
of dedicated service, the Star DiamondAward from the American Academy of Hospitality Sciences, and numerous other recognitions from the Grenada Hotel Association.

In December 2004, Her Majesty Queen Elizabeth II graciously conferred the title of Knight Commander of The Most Distinguished Order of St. Michael and St. George (KCMG) for Sir Royston’s contribution to tourism in Grenada and throughout the Caribbean.

Today, Sir Royston is internationally known for his industry knowledge and savvy. He is the former Chairman of the Caribbean Alliance for Sustainable Tourism (CAST). He is also an Honorary Director of CHTA and the Grenada Hotel and Tourism Association, and Vice President of the Board of Trustees for the Queen Elizabeth Home for Children. 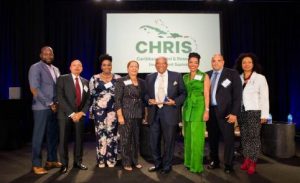 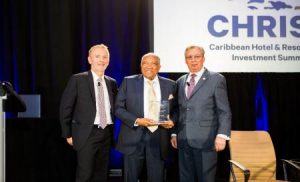