Director of the National Insurance Scheme Dorset Cromwell says the impact of COVID-19 on the financial outlook and sustainability of the Scheme in the long term will be dire.

All of the NIS’s revenue sources are expected to be adversely affected, as economic activity is on a decline with a recession predicted to follow.

Cromwell says with the reduction of income in April, NIS was forced to liquidate fixed deposits to finance its pension expenditure.

The NIS Director impresses that the introduction of an unemployment benefit program to be administered by the National Insurance Scheme amounting to 10 million EC dollars is another burden to be bear.

The National Insurance Scheme’s lifespan has now been shortened as it deals with the impact of COVID-19.

The NIS’s contribution income was for the first time insufficient in 2018 to cover expenditure.

Fast track to 2019, serious discussions were held at a community and national level which led to decisions to increase the individual contribution by 2 percent and incrementally increase retirement age to 65.

In January of this year, one of those changes to fix the failing finances came into effect however was immediately threatened by the COVID-19 pandemic.

Government facing an economic impasse due to the pandemic then asked the NIS to temporarily revert the two additional percent contributions and also to administer an unemployment benefit despite the financial constraints.

NIS Director Dorset Cromwell says the actuarial consulting firm Morneau Shepell was immediately engaged to assist NIS in designing the unemployment benefit programme while costing the programme and the impact of COVID-19.

Cornwall says essentially, the various scenarios that the  actuary consulting firms did it would reduce the number of years taken the life of the funds have.

Facing a situation of NIS’s two main sources of income decreasing dramatically, the NIS Director adds that overall expenditure is expected to rise.

The future of NIS is bleak as contribution income continues to fall, while employer contribution and investment income deteriorates. 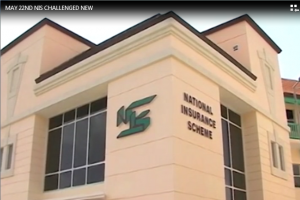 TO DISTRAUGHT TO SPEAK