Poultry Farmers are crying out for immediate action to be taken as the local mill remains closed.

The farmers say they are beginning to feel the pinch and the lack of communication is frustrating as losses are already being recorded.

In an exclusive interview with President of the Grenada Association of Poultry Producers, Jason Phillip, GBN learned that the poultry sub-sector received information that Caribbean Agro Industries, the main manufacturer of animal feed was forced to close for sanitization of the facility.

According to Phillip, limited operations ensued before production was stopped last week Sunday.

The sanitation of the facility was done on Monday, before the mill reopened on Tuesday through to Thursday where feed was sold to several poultry farmers.

The Poultry President tells GBN that on Friday, he was notified that the mill would be on complete shutdown and the staff tested for the coronavirus.

Phillip says large poultry farms have since purchased all the feed available leaving other farmers without access to feed.

Birds have begun to starve and Mr. Phillip notes that farmers are panicking from the resulting losses.

He says the farmers are pleading with the relevant authorities to find a solution. Importation of feed the president highlights will be time consuming as well as the significant cost would be deferred to customers.

Management at Caribbean Agro refused to comment as GBN sought clarity on the issue.

However, Agriculture Minister Yolande Bain-Horsford says cabinet has approved a recommendation for the company to import feed from next week which will be distributed directly to suppliers from the port. 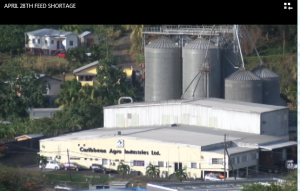