Prime Minister Dr. Keith Mitchell maintains his position in relations to the use of a small quantity of marijuana

During a recent town hall meeting at Boca in St. George, Prime Minister Mitchell said that while the use of marijuana remains illegal in Grenada he has repeated his advice to the royal Grenada police force to not waste time going after people for smoking a small spliff.

This message was conveyed by Prime Minister Mitchell during a meeting with the leadership of the Royal Grenada Police Force earlier this week.

The Prime Minister told Acting Commissioner of Police, Edvin Martin that his government will be looking at the laws, and legislation will be brought to parliament to give effect to a new policy.

He said while Grenada has not yet taken a decision on changes to be made to the law, the country cannot be immune to the changes that are taking place globally.

Chairman of the New National Party Anthony Boatswain was asked during a news conference on Thursday about the party’s position on marijuana and he said the party supports the stance taken by its leader.

The party chairman said consultations must be conducted before the party can decide on its way forward.

Dr. Mitchell is assuring Grenadians that the process of change will involve public consultation. 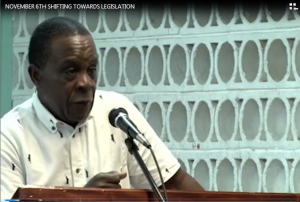