Senator Ron Redhead has given a preliminary written response to the verbal bashing he received in his absence during Thursday’s sitting of the senate.

At least three senators voiced their displeasure with Senator Redhead’s statements, in regards to the quality of water being distributed to residents in the Marli St Patrick’s area.

Leader of government business in the senate, Senator Simon Stiell first began the attack on what he called theatrical and exaggerated comments made by Senator Ron Redhead, in a sitting of the Senate on April 24th.

Senator Stiell highlights they saw the NDC’s Senator Statements and antics as a direct attack on government, that it was failing the people in providing clean and safe drinking water.

“Water qualities were tested throughout the area… and there was no evidence of any form of contamination to that water.”

Making reference to GBN’s investigative story, the senator says NAWASA also conducted interviews within the community and no complaints were forthcoming from residents.

He says Senator Redhead’s comments could have international implications on visitors, who may be deterred by the quality of water.

Another Government Senator, Winston Garraway, in his discourse joined his colleague and called for an apology from Senator Redhead for what he calls ‘reckless comments and an attack on NAWASA’.

Senator Judd Cadet also expressed his aversion to what he says is damaging claims.

Redhead who is in his final week of exams, in a statement responding, says it is important to remember when he raised the issue at the Senate; it was to call for an investigation into the matter.

Senator Redhead notes that he is still awaiting the findings of the investigation, after sending an official complaint to NAWASA on April 25th the day after senate sitting.

Senator Redhead tells GBN that he has never attacked NAWASA officials or the Government and will address the issue in a later senate sitting. 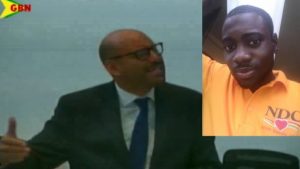