Schools Supervisors To Be Appointed

With the opening of several schools being delayed due to repairs and construction, the Ministry of Education is looking at more permanent measures in resolving such issues.

Education Minister Emmalin Pierre says they are extremely committed to ensuring that there is a conducive environment for teaching and learning.

Minister Pierre says in order to curb future issues; school supervisors would be installed to facilitate infrastructural development on field assessment and maintenance.

“This is a new element being introduced for two reasons: One, We’ve been doing a lot of repairs on schools, just over 4 week over five million dollars so we want to make sure the work we are doing, the quality is very high.”

The education minister says these supervisors would ensure that schools do not have to be repeatedly repaired, because of inferior work done.

She also expresses her disappointment that some of the repairs are being attributed to vandalism.

“We’ve had major break-ins in a number of schools, we’ve had activities that indicate that people want to be malicious and destroy and in some cases frighteningly so, we’ve had reports of fires being set in schools.”

Pierre says these actions are costing the government money which is being spent on securing the facilities.

“In one case quite recently, when the person failed in attempting to break the lock on the door, they attempted to set the door on fire. Its really unfortunate, but am just appealing to the general public, the Government of Grenada cannot at this time afford to place a security system or a security officer at every single school… and the Government should not have to be a position to do that, because we should be at a community level, the people who want to protect our institutions.”

Minister Pierre says praedial larceny is another major problem, especially for 4Hers and their agricultural projects. 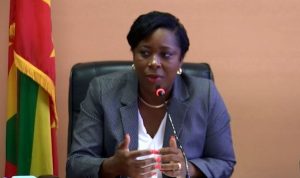