A show of appreciation as the tri- island state of Grenada on Friday saluted frontline and essential workers of this country.

The initiative entitled ‘salute by sound’ was put together by the ministry of tourism and civil aviation and the Grenada tourism authority.

Officers of the Fire, Central and Traffic departments were seen lined up in front of their headquarters on the Carenage as they along with hundreds other front-line workers in different parts of the country were recognised for their role in keeping the country safe during the Covid-19 Pandemic.

In the midst of the curfew, for five minutes the ‘Salute by Sound’ event ,saw Grenadians making use of  vehicle Horns, drums and buckets, Steel pans, Conch shells and other instruments to make loud sounds wherever they were.

Minister of Tourism & Civil Aviation, Dr. Clarice Modeste-Curwen along with the Grenada Tourism Authority  team expressed gratefulness for the tremendous show of support and gratitude for front-line workers.

GTA’s communications officer Ria Murray says it was more than was expected.

She says over fifty videos were submitted showing how people chose to do their “Salute by Sound”. 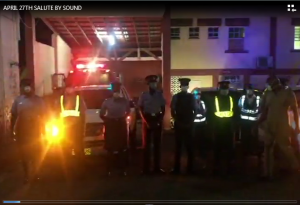