The Sahara dust, which is an annual occurrence, has again raised the interest of medical practitioners, as this phenomenon will result in aggravated respiratory and skin problems.

Senior medical officer within the ministry of health, Dr. Francis Martin, says while the dust possesses different variations, the greatest concern at this time is the dust that poses a threat to respiratory system.

Keeping homes and the environment clean and well aired is one way to avoid complications.  He says the dust can carry rain that can cause mold and create conditions that people suffering from asthma can have increased reactions.

He says the dust can cause skin infections and irritation of the eyes and nose and other allergic reactions.

He urged people with asthma and other respiratory illnesses to keep medications close at hand.

Dr. Martin added that in his capacity as a medical practitioner, he has seen an increase in the cases of respiratory and skin problems over the past few days.

The Sahara dust is carried by the north east trade winds, where very large concentrations of mineral dust can be found in the Atlantic, reaching the Caribbean.

Over the past few days the dust has been visible, posing a number of concerns to locals and health officials.

While the local met office has refused to address the matter in Grenada, Trinidad Meteorologists have advised that people can brace for the ‘tail end’ of the Saharan dust by Tuesday evening into Wednesday. 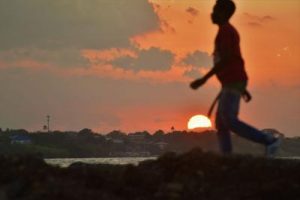