SADDENED AT HIS PASSING 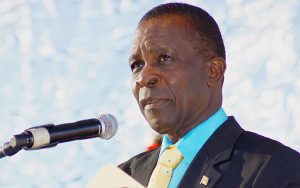 Prime Minister and Minister of National Security Dr. Keith Mitchell, has expressed sympathy on the passing of former Commissioner of Police, Fitzroy Bedeau.

Mr Bedeau passed away last Friday after battling an illness for some time.

Dr Mitchell is quoted in a press release issued on Tuesday, as saying, “I was saddened to learn of the passing of Former Commissioner, Bedeau. He dedicated a significant period of his professional life to policing and ensuring safety and security in this country.

“It is a very sad time as we mourn the passing of a man who has given such selfless service, but we must thank God for his contribution. I know he would have left Grenada a better place than he met it. I pray that he rests in eternal peace,” end of quote.

Bedeau first enlisted as a police officer in April 1967, retiring as an Assistant Commissioner of Police in 1988.

He returned to the Royal Grenada Police Force in 1995 as Deputy Commissioner and from 1997 to 2005, served as Commissioner.

POSITIVES OF THE CBI

US HOSPITAL SHIP TO MAKE INAUGURAL CALL TO GRENADA IN SEPTEMBER