ROLAND BHOLA BACK IN THE SENATE

Former government minister Roland Bhola will return to parliament to take up senatorial duties as a replacement for the resigned senator Kim George. He is expected to take the oath of office on December 15 when the senate begins debate on the 2021 budget presentation

Roland Bhola has confirmed to GBN that he accepted his party’s request to replace former senator Kim George in the Upper House who resigned in October citing demands of her profession and senate preparation.

In an exclusive interview with GBN, Bhola said he was asked to step in to fill the vacant position and answered.

He is expected to take the oath of office when the Senate meets to debate the 2021 budget on December 15.

When asked if he will be willing to become a candidate if asked by the party he said it will have to be an emergency situation for that to happen.

Senator Bhola formerly sat as minister of Agriculture and sports. 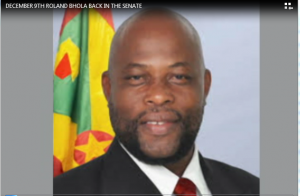