It’s a new day for ICT within Caricom as a signed declaration towards the reduction of intra Caricom roaming charges, will change how Caribbean nationals can stay connected to family and friends when traveling within Caricom countries.

Caribbean nationals will soon see a significant reduction in roaming charges by their network providers when traveling to other CARICOM countries.

This comes as CARICOM’S lead head for science and Technology Prime Minister Dr. Keith Mitchell along with representatives from Cable and Wireless and Digicel signed a declaration for the reduction of Intra CARICOM roaming charges on Wednesday.

The ambits of the declaration will be implemented this year, and is intended only for CARICOM citizens and will not include international visitors.

President of the Caribbean telecommunications union Melford Nicholas says after years of discussion, the initiative finally came through after political intervention in 2020.

With CARICOM working towards the creation of a Single ICT Space, the removal of roaming charges is seen as key to reducing inefficiencies, lowering costs, and increasing productivity as part of the digital transformative initiative.

Both Grenada’s Prime Minister Dr. Keith Mitchell and lead Head of Government with responsibility for CSME, Barbados’s Prime Minister Mia Mottley, agree that this is a step towards a “roam-like-at-home” arrangement, similar to the European Union, eliminating roaming charges on voice, data, and SMS messages.

Representatives from both Digicel and Cable and Wireless at the signing ceremony expressed their commitment to adding value for customers by reducing roaming charges.

C&W communications Vice President of the South Caribbean Kurlay Prescod encouraged Heads of government to review some of their taxes to see more reduction.

Nationals are expected to see up to 70% saving in roaming charges due to this declaration as the rates will vary based on the provider used.

The Signing ceremony of the declaration was held at the Grenada trade center Annex on Wednesday morning. 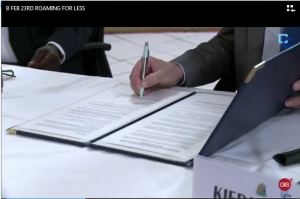