Ranking officers within the Royal Grenada Police force say that the questioning of GUT president Jude Bartholomew surrounds an ongoing investigation regarding possible violations of the Emergency Powers Act and breaches of the Covid-19 protocols.

Bartholomew was questioned at the St. David’s Police Station on Saturday, April 24, 2021, by officers of the Criminal Investigations Department.

At a media Briefing on Monday assistant commissioner of police Franklyn Redhead says the move made by the police is not intended to prevent anyone from excising their rights.

Redhead said the president was questioned for just over two hours without charge and was allowed to leave at the conclusion pending further investigations.

The RGPF is appealing to the general public to co-operate as they manage this difficult period. 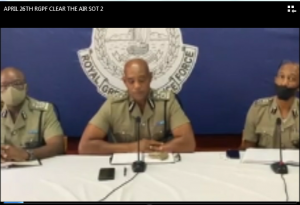