Three fishermen from St Patrick’s on Sunday were rescued at sea by Clinton Bailey and his crew, with his vessel Irish cream.

Bailey was out fishing at the time when he heard the Captain of the distressed vessel, radioing for help for the team.

Owner and Captain of Irish Cream, Clinton Bailey says it took a one hour search before the men were found.

He described the rescue mission as “a needle in a haystack”.

Sunday’s rescue was the second reported sea incident in a three day period.

The Coast Guard on Thursday rescued three fishermen about 40 miles southwest of Grenada, after their 50 feet fishing vessel encountered problems. 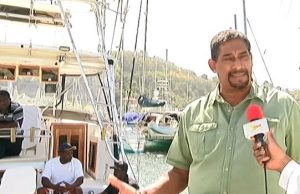 Mr. Killa ‘Runs with it’