The long awaited official opening of what is purported to be the best premium rum in world is already bringing recognition and benefits to Grenada.

Local employment and the creation of something intrinsic to Grenada were some of the highlights of launch the renegade rum distillery on Tuesday.

Mark Raneire chief executive officer of renegade rum distillery says the question of whether they can make rum that is profound as single malt will soon be answered.

The CEO says the premium rum will have the distinct honour of being made in Grenada and distilled and bottled by Grenadians.

He notes that the flavours are extracted from the different areas in Grenada to produce 150 mini rums which will be later combined into the most profound rum the world has ever seen.

Minister David notes the rum distillery is good news for agro-tourism, rural development as well as the environment whereby recycling is strictly observed. 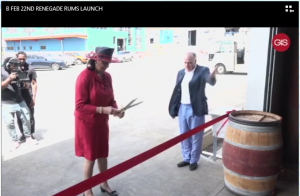 RASTAFARIANS, WHY WAIT SO LONG?