Grenadians are reflecting on March 13th, 1979 as this year marks the 42nd anniversary of the start of the revolution which will be commemorated on Saturday.

Ruggles Ferguson interim president of the Grenada revolution committee recalls volunteerism as an important element in the days of the revolution an aspect he says is lacking among people in this present day.

This year’s theme is: ‘Celebrating the Grenada Revolution in the times of Covid, focusing on the Economy, Education, Health and the Peoples Power’.

According to Ruggles Ferguson, interim president of the Grenada revolution committee, this year’s observance will take the form of a virtual Forum on Saturday 13th from 4 pm.

The three panelists are Dr. Ann Hicklyn Hudson an educator who worked in Grenada during the Revolutionary period, Dr. Sonia Nixon who will be focusing on the health aspect, and Dr. Brian Francis economist focusing on the Economy.

Ferguson highlighted some of the other activities that will mark the occasion.

According to Ferguson, Grenada’s revolution marks the first in the English-speaking world. 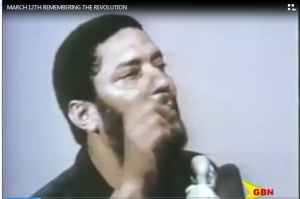 THE PANDEMIC AND CLIMATE RESELIENCE